This post reports on the UK-Kenya Preschool Partnership project that took place in Cranborne Preschool in Dorset, UK and Ng’ondu Preschool in Njoro, Kenya, and associated with the UN World Day of Social Justice on February 20th. The focus was gender equality and the promotion of positive female role models in the UK and Kenya. https://www.facebook.com/omep.kenya

The children in the UK and Kenya learnt about Wangari Maathai a particularly brilliant and successful Kenyan environmental scientist, and this provided a positive role model for the girls, and challenged some stereotypes held by many of the boys. In addition to the Education for sustainable development and social Justice objectives of the project the opportunity was taken to introduce the Kenyan preschool to the use of socio-dramatic play and to some of the emergent literacy practices that are used in most UK preschools. 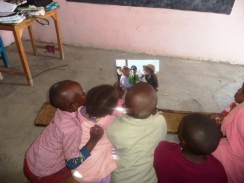 The children in Kenya saw the video of Wangari Maathai on a tablet PC supplied for the project by OMEP UK (See youtube).
Socio-dramatc play is a form of play where always has some imaginary or fantasy element to it, where the children involved take on a particular role that has implicit rules, and where they interact verbally , in role, with each other (Smilansky & Shefatya, 1992). The most common form of socio-dramatic play is related to the family and many preschools around the world include a ‘Home Corner’ area with household props like kitchen equipment, washing machines, dining tables and chairs that are set up to encourage this form of play. Through socio-dramatic play, children learn how to make conversations, how to take turns, ask and answer questions, and to listen. The efforts they make to stay in role supports their development of self-regulation as well. Young children enjoy socio-dramatic play and as they g 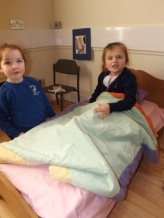 row older and more capable some of the play scenario’s that they act out can be very sophisticated.

Children playing in a pretend ‘Shop’ for example may learn a great deal about the economic world and teachers often maximize the opportunities in such play to encourage emergent literacy and numeracy activities. Socio-dramatic play also provides a context for children to develop and practice many important, attitude, skills and behaviours that contribute to their future success in school and life, and one way that teachers have found they can encourage children to explore adult roles is to provide dressing up clothes. This form of play is routine at Cranborne and their classroom currently includes a ‘Hospital corner’ where the children share their experiences and learn thorough their play all about the caring roles of hospital staff.

Girls are currently seriously underachieving in the Kenyan education system and Kenya ranks 107th (of 136 countries) on the Global Gender Gap Index for access to educational attainment (Hausmann, et al 2013). Girls underachieve at every level and they finally make up only 38% of University enrollments. Preschool teachers are predominantly female and they also suffer from discrimination. While primary school teachers are paid by the government, even where preschool classes are attached to primary schools in Kenya, they are funded by parents paying fees. The salaries are below the basic minimum wage recommended by the Ministry of Labour and depend on the total number of children enrolled and the parents’ ability to pay on a weekly basis (Hein and Cassirer, 2010).

It is in the early years that children’s attitudes are first formed, and in many rural African contexts, it is only in the preschool that many girls come into contact with educated women:

“Girls lack positive role models within schools. Research participants told us that the lack of gender balance in teaching staff at secondary schools and in secondary grades…and in management positions across primary and secondary levels means that girls have few female role models”. (PFTH/VSO, 2013).

In telling the children Matthi’s story it was stressed that what she had achieved was especially wonderful because at that time in Kenya women were not expected to tell men what they should do…in fact even in the UK today, women still don’t make up half the members of parliament, so the UK also has to make an effort to make the system fair for everyone. In Kenya there is a now a new law that says more women should be in parliament so the situation is getting better. The children learnt that women in science, in business and in the government in the future will be able to help us decide what to do.

Cranborne Preschool in the UK donated some dressing up clothes that would support the girls in their partner preschool develop positive dispositions towards science and and towards strong adult roles for women. Before they parceled the clothes up they tried them out. One of the girls took the role of a builder who had been injured on her work site and another girl acted out the role of a Doctor.

When the clothes arrived in Kenya, the children were shown the photographs of the UK children playing in them and the girls dressed up and played out the same socio-drama for themselves. Many of the other activities that the children in Cranborne enjoyed were also repeated in Ng’ondu. Ng’ondu preschool is poorly equipped with only a few learning materials e.g books, displays and writing materials for the children. There was no play apparatus, toys or props at all. The teacher is responsible for the care and education of the ‘baby’, ’middle’ and ‘top class’. She also cooks for the children to supplement their poor diet, the children always take porridge at break time and rice and cabbage at lunch time every day. There are not enough desks for the children and no mattresses for children to sleep on. The children are therefore forced to sleep directly on the floor and some spread their sweaters to sleep on. 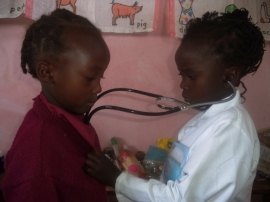 The children in both preschools were told Wangari was born in 1940, that she was the first woman to win a Nobel Peace Prize in Africa, and that her good deeds will live on to inspire many people. They were told that she encouraged many poor women to plant trees.They were able to plant over 30 million trees in Kenya.  She was later elected as a member of parliament and she served as assistant minister for environment and natural resources. She contributed highly to sustainable development. Wangari died of cancer on 26th September 2011 at age of 71 years. After the lesson many children were motivated and said they will be planting trees and that they will work hard to be like Wangari in future:

‘M’ said that she would like to become a nurse in future and be taking care of patients in hospitals.

‘P1’ said that he would like to become the president of Kenya and help all the families in poverty.

‘W’ a said ” When I grow up I would like to become a teacher,I would love teaching other children as our teachers does”

At Cranborne the children also learnt about the importance of the world’s forests, the threats to their existence and the heroic work of people like Wangari Maathai in protecting them. The children were given practical activities identifying all the things around them that are made from wood/card/paper etc, and following Wangari’s example in the video, their attention was constantly drawn to the the fact that the animals, plants, trees and people who work in the forest can only make things happen (or grow) very slowly ‘a little bit at a time’. The children quickly came to predict and repeat the answer to questions that they were asked… e.g. “What do you think they would say (e.g. the tree, the forest ranger etc.) if you asked them why they carried on even though they are achieving so little each day?…..The answer was always that they would say: ‘I’m doing the best I can’. So throughout the activities the phrase ‘I’m doing the best I can’ was often repeated and the children were finally shown the video example of Wangari Maathai where she uses the same words. It was emphasised that Wangari achieved so much even though it was only ‘by doing the best she could’ and the children were asked what they thought they could ‘help make happen’ as they grown up by ‘doing the best they can’. The boys were also asked ‘how they could help their sisters do that? 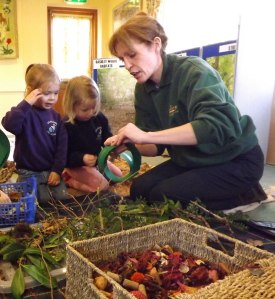 Zoe Miles, a forest school educator from a local 20 acre semi natural woodland resource, (Woodlander Holbourne Bashley) visited the children at Cranborne. She brought some of the woodlands indoors with her and helped the teachers focus the children’s attention on the importance of trees, how long they took to grow, and how quickly they could be destroyed. The children made wood ‘cookies’, and ‘woodland crowns’. They also learnt about woodland management and about how Zoe and her colleagues were ‘doing the very best they can’.

The children were able to touch and feel different wood rounds (logs), and bark from Conifer, Oak, Birch, Hornbeam and Ash. The idea was for the children to understand the different properties of wood using their senses of touch, sight and smell. The children were encouraged to draw and personalise their wood cookies with crayons, and to create crowns using woodland materials (leaves, moss, licen, seeds, conifers, branches, bark, buds and cuttings from different trees). They also had the option to make bracelets from woodland material. A Woodland Habitat display board with Wildlife stickers helped to reiterate the importance of woodlands as a habitat for wildlife. The purpose was to start to create an awareness and connection between themselves, wildlife and the environment with the aim to raise an awareness of the importance that we all need to do the ‘best we can’ to protect the worlds woodlands and forests.